We will hold our final Friday night concert at the Alcazar.

The Alcazar theater features movies, concerts, improvisation theater workshop and other events. It is a beatiful old historic theater which has been fully restored. Located in downtown just half-a-block off the main drag, The previously-named Plaza Playhouse Theater has been entertaining the sleepy surf town and greater Carpinteria Valley since 1928. 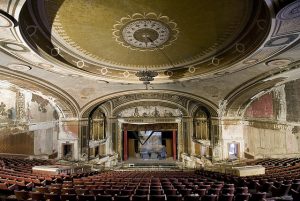 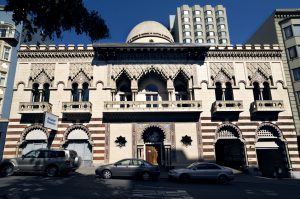 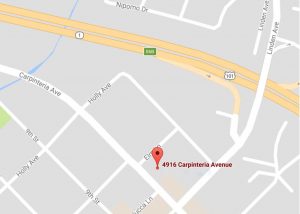 THE ALCAZAR – OUR BEGINNING

The Alcazar (the theater’s original name) opened on April 27, 1928.  Owner, Henry J. Muller invested $50,000 to build the theater that builder Alex C. D’Alfonso claimed was “As Strong and Sturdy as the Rock of Gibralter”.  The opening of the theatre prompted telegrams of congratulations from MGM, Paramount and Christie Films among others to the first proprietor of the theater, long time resident and actor Oliver Prickett (sometimes known as Oliver Blake) of “Ma and Pa Kettle” fame.

Opening night at the Alcazar featured a live band and the premier showing of a comedy “The Fifty-Fifty Girl”….admission was $1.10.

Through the 89 years to follow, the Alcazar changed hands and names…such as the Ritz, the Del Mar, the Tradewinds and for the past few decades, the Plaza Theater, most recently under the management of Metropolitan Theatres.

After almost a decade of being known as the Plaza Playhouse Theater, we’ve changed back to our original namesake — Alcazar Theatre — and look forward to returning our theater to a center of arts and entertainment for the entire Carpinteria Valley community.

The original proprietor of the Alcazar Theater, Oliver Prickett had a long career in the entertainment industry.  Lanky and long-nosed, Oliver acted on stage under the name of Oliver Blake. From the mid-1920s onward, Blake was a fixture at the Pasadena Playhouse, where his brother Charles was managing director and his sister in law Maudie was a resident character actress. At the Playhouse, he starred in such productions as Charley’s Aunt and also taught classes for first-year students. He entered films in 1941, and for his first few years before the camera was confined to bit roles like the Blue Parrot waiter in Casablanca (1942). One of his more visible screen assignments was as dour-faced Indian neighbor Geoduck in Universal’s Ma and Pa Kettle series.

An apparent favorite of comedian Bob Hope, Ollie showed up in a variety of roles in several Hope farces, notably as the “world’s most emaciated Santa Claus” in The Seven Little Foys (1955). On TV, he played the recurring role of Carl Dorf in the 1956 sitcom The Brothers.

Shadow of the Thin Man

The Belle of New York